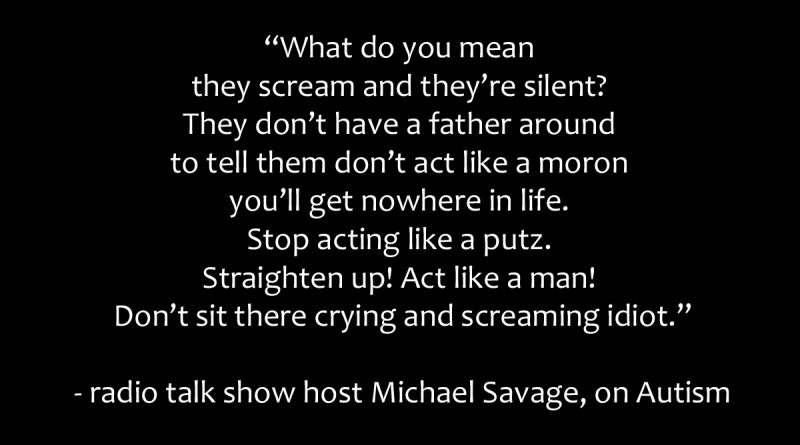 “Now you want me to tell you my opinion on autism since I’m not talking about autism…a fraud, a racket.”

He went on to say:

“What do you mean they scream and they’re silent? They don’t have a father around to tell them don’t act like a moron you’ll get nowhere in life. Stop acting like a putz. Straighten up! Act like a man! Don’t sit there crying and screaming idiot.”

Yes, he said that about people on the autism spectrum. They should just “straighten up”. They should ignore their sensory issues and epilepsy and other challenges. Just get back to being “normal.”

When called on what he’d said, he later added:

“There is no definitive medical diagnosis for autism. None.”

That is, these people are simply misbehaving. Simply acting out. They need a disciplinarian father in their lives to kick them into shape.

He had 11 million listeners at his peak. 11 million people who followed and were guided by his message. And this is the message they were hearing.

Michael Savage has been broadcasting since 1995. He currently broadcasts on KSFO and is syndicated by Westwood One.

Image of text of the Michael Savage quote was created by me.