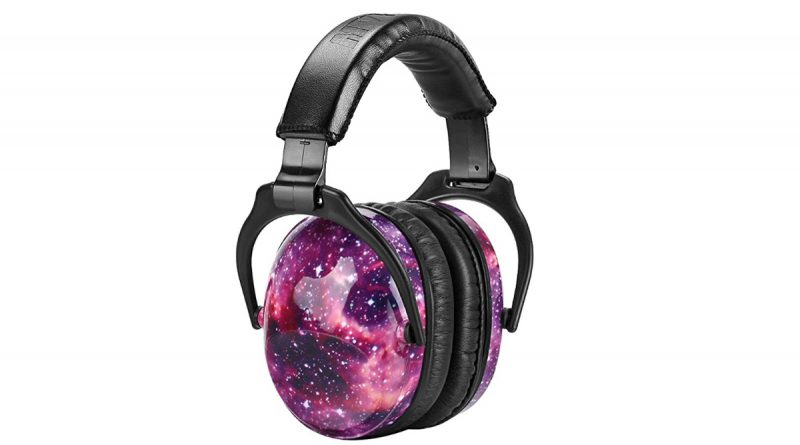 When I was growing up, there was little thought given to the ears of children. Heck, we were the generation when they were putting in high-powered hand-air-blowers in every public bathroom, right at child head level. It was just assumed that these jet-engine-noise blowers would be fine for tiny ears. Never mind tiny ears with sensory issues which were sending too much data to the brain as it was.

This was the era where rock music was blastingly loud and people joked about it. There was little knowledge that ears actually were permanently damaged by that kind of volume.

Thank goodness, in modern times we actually realize that ears are sensitive, delicate instruments which can be destroyed by sound. Cynically, I think it’s because rich while older people realized their hearing was fading and demanded research on how to fix it. Fortunately, that research then helps all of us.

Which brings us to noise reduction earmuffs / headphones.

Kid-sized noise shielding headphones were DEFINITELY not a thing when I was growing up. If they even existed at all, they would have been in specialty hunting stores for boys who were hunting with their fathers. Even then, most hunters back then wouldn’t want headphones, because it would impede their ability to hear the animals.

But thank goodness, due to all the research on the delicacy of ears, now you see kids with hearing protectors at sporting events. At musical events. And, yes, you see many children on the autism spectrum wearing them even in situations where the noise might be considered “not damaging level.”

We have discovered the DNA mutations which cause the sensory neurons, such as in the ears, to be over-exciteable. It’s not necessarily that the brain itself has a “problem” here. The brain is doing its job taking in input. The problem is that those ears (and fingers and so on) are blasting out an overload of signals to the brain. The poor brain is having a hard time keeping up.

By creating a physical buffer for the ears, we’re compensating for those over-exciteable ear neurons. We’re bringing the signal flow down to a more normal level, so the brain can keep up with what is going on.

Do Ear Muffs Create a Sense of Difference?

I’ve heard some people discuss the idea that wearing ear muffs makes a person “stand out” as someone to be treated differently. It’s like wearing a big “I AM AUTISTIC” sign on one’s head. Autism still has many stereotypes in our society, and not all of them are healthy ones.

Do we want children and teens labelled like this?

It’s definitely true that headphones are visible. They’re not hidden like say earplugs are. However, many kids (and adults!) hate earplugs. Also, earplugs generally aren’t good at the balance of blocking loud noises while allowing gentle conversation. And finally, with headphones / ear muffs you can pipe in soothing music from a phone. So there are many benefits to the headphone route.

It’s definitely true that if I had had earmuffs growing up (in the “dark ages”) I would have gotten thousands upon thousands of questions about them. I’d have stood out as unusual and ‘freakish’. For me, it would have been a constant source of irritation.

But for kids nowadays? We see headphones everywhere. They’re on TV. They’re in movies. If a child in our modern times goes out with headphones on, yes there will absolutely be a recognition that the child is wearing headphones. Maybe the sight will cause a follow-up thought that the child has some sort of a challenge. But the presence of headphones is far more “normalized” than in past years.

Should Earmuffs Be The Only Solution?

I think it’s important to caveat that no one solution should only ever be “the only solution we have”. Earmuffs get lost! They break. There’s all sorts of reasons you can end up somewhere without the earmuffs or earplugs or whatever other solution you aim for.

So you should always work on all routes you can. Develop coping mechanisms. Build in for backup plans. This can be really hard on the autism spectrum where routine is so important. That’s part of why practicing with several solutions can help. That way when it comes to an event, if something has a problem, you have at least a chance of another path being accepted.

Still, I think it’s a good idea to go with the “best solution” when you can, and if that best solution is earmuffs, then embrace it. We’re all different. We all have different challenges.

I’m an adult. When I travel, I absolutely bring my Bose noise-cancelling headphones with me and extra batteries. Yes, I have coping techniques in case the headphones are inaccessible or the batteries die. But when I have those headphones on, it’s pure bliss. It’s an important part of how I navigate a challenging path.

What are your thoughts on earmuffs? Let me know!

This is what I use – designed for adults –

This article talks about how it’s the sensory neurons which are sending too many signals, rather than the brain itself having a problem here –

Image of Zohan earphones used as fair use to illustrate how they look.