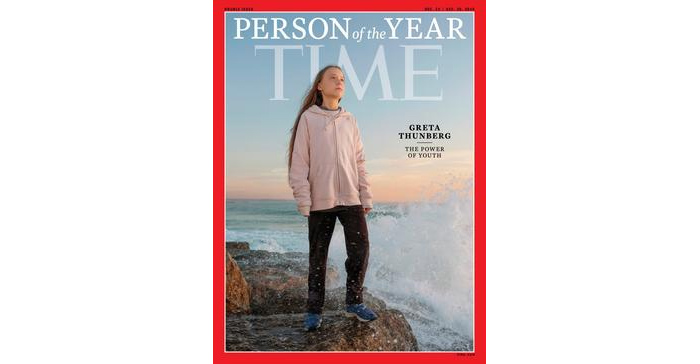 Back in 1927, Time Magazine decided that it should feature a “Man of the Year” each year. Scarily, it wasn’t until 1999 that they renamed the feature “Person of the Year”. I know that might still sound like the Dark Ages to younger people, but for many of us it was the blink of an eye ago.

Presidents pretty much expect to earn this honor at least once. Donald Trump so coveted this honor that he made up fake issues and hung them in his golf course resorts. He did earn his Person of the Year cover in 2016, when he was elected president. Not satisfied, he then thought he deserved it again in 2017, when the cover actually went to celebrate whistleblowers on harassment. 2018 honored journalists who had died in the line of duty.

It’s hard to even put into words what an incredible honor it is to have sixteen year old Greta Thunberg, proud Asperger’s climate activist, on the cover. She’s just sixteen years old. The previous youngest person chosen by Time was Charles Lindbergh, who was 25 when he made his cross-Atlantic flight. Greta is nearly a full ten years younger than him.

And in addition, she is on the autism spectrum.

It’s hard enough for people on the autism spectrum to get honest attention. In movies, they might be a sympathetic side character who motivates the main character to do something. In novels, they are sometimes the “quirky friend” who adds comic relief. But here we have a young woman who is chosen not because of a quirk. Not as a “sympathetic vote”. But because she, being her authentic self, doing what she has a passion for, is changing the entire world.

She proudly proclaims that autism is her superpower. It lets her focus full force on what she knows is important for the entire world.

It can be hard enough for people on the spectrum to deal with society. But this sixteen year old has to deal with world leaders disparaging and bullying her.

September 2019 – US President Trump sarcastically tweeted that Greta was “A very happy young girl looking forward to a bright and wonderful future.” This from a man who actively tries to keep coal mines alive.

December 2019 – Brazilian President Jair Bolsonaro said “It’s amazing how much space the press gives this kind of pirralha [brat].” What, because she knows what she’s talking about and can speak coherently about it, she’s uppity for a teenager? Teenagers should be seen but not heard?

But then came her Time Person of the Year cover. And President Trump just could not take the fact that a GIRL had won instead of him. A GIRL who had autism! When he’s a big strong man who can make deals!

So this adult presidential man, who had just been incredibly upset that a person dared to say something about his own teenage son, decided to tweet about the cover: “So ridiculous. Greta must work on her Anger Management problem, then go to a good old fashioned movie with a friend! Chill Greta, Chill!”

Where does one even begin. Why is it ridiculous that Greta is on the cover of Time? Because she’s young? Because she’s female? Because she’s on the autism spectrum? Because she cares passionately about saving our Earth from destruction – something we should all care deeply about?

And Trump, the person who spends much of his time frothing his followers into hatred and fear, thinks any other person has an Anger Management problem? Especially a young woman who sees that our Earth is hurtling its way to disaster? He thinks teenage girls should just go hang out at movies and leave the “important stuff” to old men?

Image of Time cover of Greta Thunberg used with fair use to promote the issue.