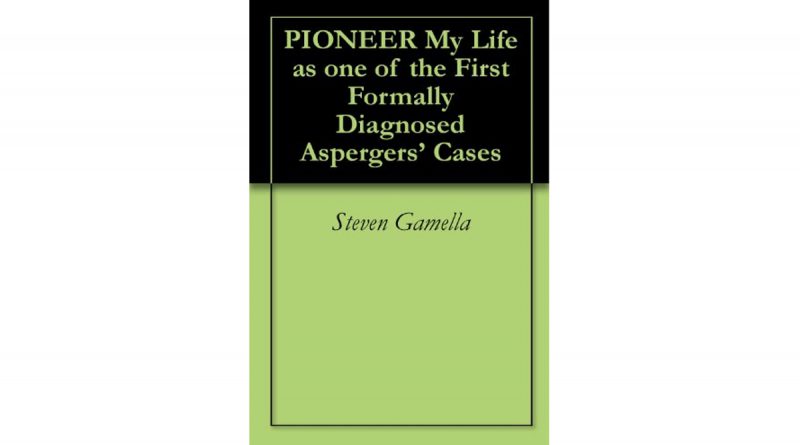 In the book PIONEER My Life as one of the First Formally Diagnosed Aspergers’ Cases, Steven Gamella speaks with his own voice about what it was like to grow up in the ’90s with an Asperger’s diagnosis.

The book is only 99 cents, but it is also very short. It’s about four complete pages all told. It only presents his birth through kindergarten, with some other notes about his current life. So this “book” is more similar to a time-bounded blog post than to a full length memoir. That being said, these are VERY densely packed paragraphs full of details and without any fluff at all. So it reads as a much fuller experience.

Steven was born in 1989 and was 23 at the time of writing the book in 2013. In it he says he was one of the first people formally diagnosed with Asperger’s.

The book primarily goes from ages one to six. Steven is remembering these events from adulthood. Steven is very state-the-facts about his view of the world. This isn’t a flowery novel. It’s a list of the things that happened. If he had had an editor it might be easier to read and parse, but I also see the value of hearing this in his own words.

Much of this is about what Stephen has been told about his earliest days. He was an extremely precocious child with solid verbal skills. Clearly he doesn’t remember his illness at age one. He was told he came down with a 105.7 fever, had a cooling bath, and then his brain chemistry was completely changed as a result. He became more fearful, which would be natural for a child with a hospital experience. But we don’t get any other real sense of how he “changed”. He is still just as precocious – that didn’t change. He is recognized by teachers and students as still being brilliant. He loved bugs and insects. He’d catch them and scare the girls. He was recognized as quite smart, even then.

But the story ends there. We only know from the forward that he eventually graduated with honors from high school. He managed this even though he was in a psychiatric hospital half the time. We know he went to a community college.

Out of the four pages of content, which is mostly about him as a tiny child, these few sections stand out. It’s where he’s adding asides about his state now as a 23-year-old male with Asperger’s. He feels he is an “invalid, sub-human entity” and that his life was completely ruined by that fever he had when he was one. He feels his inability to ever have a girlfriend or real friends was due to that one-year-old-child fever.

“I would rather be dying of brain cancer. At least people pay attention to you when you’re dying. There is something terribly wrong with me and there is nothing I can do about it. … I’m destined for failure.”

That is extremely poignant. A young human being feels this way about his Asperger’s. He feels completely trapped.

It’s also true that Steven has to rely on what he’s been told in terms of what happened to him as a child. If people told him things, he is fine to relay what they told.

In terms of people reading this to understand Asperger’s, it would really help if the book was better formatted. It’s incredibly hard to read it in this dense, massive-wall-of-text format. I know some people aren’t natural writers. It’s why editors exist. Pretty much every non-self-published book on Amazon uses an editor for this reason. It would make sense to pay the $40 or whatever it would take to edit 7 pages of text to present this in a clearer fashion, so that his story can be better heard and understood.

But the real heart of this story isn’t the long paragraphs about the names of the kids in his kindergarten class. It’s not about the details of the snakes and snails he wants to study. It’s that section in the middle. The section where he’s just so desolate about not having friends, not having a girlfriend, not having a sense of a future, that he doesn’t even want to be alive.

That’s important to be heard.

The term Asperger’s came about in the 1940s, described by Hans Asperger. It was in the APA manual in 1994 as a standalone entry (i.e. not directly tied to autism). I suppose one could say that therefore, in the United States, people didn’t get that specific APA manual code until 1994. Still, it seems a stretch to say that nobody anywhere in the world was formally diagnosed with Aspergers in all that time. However, it could easily be that Steven was told that by his doctor, and that the idea of being a “first” gives him strength.

Indeed, Steven makes much of this fact. He says he was used as a case study and an example of what a person with Asperger’s could achieve, compared with autism. Again, it seems odd to me that a classification known about since the 1940s, which certainly had thousands of patients in its mix, had never had a person who attended high school and college. But we’re hearing this from the patient’s perspective of what doctors told him. It could easily be they were praising him to keep him going.

The center asides about Steven’s current struggles are what make this short piece worth reading. This realization that we are failing people on the spectrum. That we are causing someone in this modern world to feel alone, helpless, and worthless, because they have a condition that thousands of others triumph as their superpower. It makes us wonder how we can reach him. How we can help him find his footing and wrap himself around his strengths.

The cover image is used in fair use to represent the book.